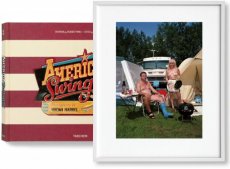 Naomi Harris. America Swings, Art Edition No. 51–100 ‘Barbecue’
The Secret Life of America’s Bible Belt
Swinging sex lives of everyday Americans
This Art Edition is limited to 50 numbered copies, signed by both Naomi Harris and Richard Prince. The volumes No. 51–100 are accompanied by the chromogenic print Broken Leg and Barbecue (Swingstock 2004, Duxbury, MN), 27.9 x 35.6 cm (11 x 14 in.). The cover features a four-color, silk-screened, three-dimensional stamped-metal reproduction of a classic American motel sign, specially conceived and created for this edition.
Richard Prince discovered Naomi Harris in TASCHEN’s The New Erotic Photography and was so intrigued by her photos of American swingers that he tracked down the 34-year-old New Yorker, determined to make her his protégé.
When he discovered TASCHEN had signed her to do America Swings he asked to do an interview with her, where he reveals part of what makes her work so unique: “When I look at one of your swinger photos what I’m looking at is mostly you ‘outside’ the picture looking at what you’re photographing… half-naked, all naked, taking these photos of next-door neighbors having sex…”
He refers to Harris’s secret for winning the confidence of her subjects: to penetrate the world of middle-class mate-swapping she had to join them, often working in just shoes and a tool belt to hold her camera gear. Her extreme technique worked so well that in 48 months she was able to photograph 38 parties, crisscrossing the country from Mahwah, New Jersey, to Pleasanton, California; from Big Lake, Minnesota, to Washington, Texas. Her subjects are not the usual perfected androids who populate contemporary erotica, but ordinary people with extraordinary sex lives, including multiorgasmic schoolteachers, polyamorous nurses, bisexual senior citizens and the Mandingos, a group of African-American men who service white wives.
Stunningly photographed and surprisingly sexy, Richard Prince describes Harris’s America Swings as “something that’s gloriously alternative, that isn’t rentable, that can’t be downloaded, that’s uninhibited and filled with a sense of strange joy. Almost like a J. G. Ballard theme park for sex.”
“These people are definitely having better sex than the rest of us.”
—Naomi Harris
The photographer
Naomi Harris was born in Toronto, Canada, in 1973. She received her photographic training at New York’s International Center of Photography. She has been published in Fortune, Flaunt, Life, and Heeb magazines, and likes to knit, sing karaoke, and frequent nude beaches. She lives in Brooklyn.
The contributing author
Richard Prince, painter, photographer, and collagist, was born in 1949 in the Panama Canal Zone. He is known as a critic of and commentator on American consumer culture and as a master of appropriated art. He currently lives and works in New York City.
The editor
Dian Hanson produced a variety of men’s magazines from 1976 to 2001, including Juggs, Outlaw Biker, and Leg Show, before becoming TASCHEN’s Sexy Book Editor. Her titles include the “body part” series, The Art of Pin-up, Psychedelic Sex, and Ren Hang.
Naomi Harris. America Swings, Art Edition No. 51–100 ‘Barbecue’
Edition of 50
Naomi Harris, Richard Prince, Dian Hanson
C-Print, 27.9 x 35.6 cm,
embossed hardcover volume in slipcase,
37 x 29 cm,
256 pages
Multilingual Edition: English, French, German